Eiríkur Örn Norðdahl is an Icelandic poet, translator and author of four novels. His most recent novel Illska (Evil, 2012), was awarded the Icelandic Literary Prize and the Icelandic Book Merchants' Prize. Sometimes Eiríkur makes (award-winning!) animated poetry and quite often he performs (mind-blowing!) sound poetry at festivals of art, music and poetry. He has also published a book of poetics, Booby, Be Quiet! (2010, poEsia).  His forthcoming book of poems is Hnefi eða vitstola orð.

You can read one of his poems in English and Welsh translation on the festival website. 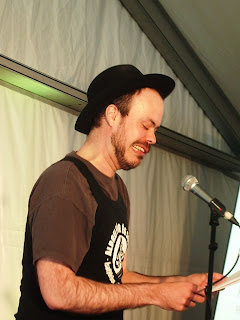 Ahead of his performances in North Wales this weekend, Eiríkur spoke to poet and festival blogger Nia Davies.

Nia: I saw you perform earlier this year at StAnza in Scotland. I found your performance exhilarating and warm - a celebratory subversion of the medium of language and sound. It seems that experiment is central to your writing processes. And you’ve hinted elsewhere that your route into poetry was one of a fight with boredom.  Would you agree with that? In other words, how does restless figure in your practice?

Eiríkur: I used to be really nervous when reading on stage. I would tremble horribly and read too fast – people were always complaining they didn't catch what I was saying, asking me to slow down, which would make me even more nervous, so my feet would start trembling and when I'd clench my legs to stop them my hands would start shaking, so much that I'd not be able to read the text I was holding, and when I clenched my arms I'd start stuttering and fumbling with my words. At some point, a little over ten years ago, I realized that if I went in the opposite direction and spoke louder and faster I could get rid of all that nervous energy, or at least put it too some use. I guess that's not really restlessness but it's a related matter – living is mostly a question of what to do with the energy, how to preserve it and how to spend it. I do like dicking around, fiddling and playing around – with paper, word, Word, flash, sound, whatever's around to be played with.

I used to live in Finland and I'd speak Icelandic to my then wife and she'd answer in Swedish, and our son would jumble everything together, while our friends spoke mostly Czech, French, Mandarin, German, Portuguese, Spanish and Finnish – and being immersed in languages like that is like fumbling around in the dark, feeling your way around, trying to pair things together more or less blindly, so you start seeing etymological strands everywhere (like noticing that the word for draft beer in Finnish is "tuoppi" and in Brazil it's "chopp" and feeling that they're almost the same). I guess what I'm trying to say is that I enjoy the experiment, I enjoy the fumbling around, I enjoy being nervous and I enjoy learning new things.

I think that malforming or destroying or stretching the language does have a deeper philosophical point, as well as a political and social point, but I'd be lying if I didn't own up to the fact that I do it because I enjoy it on some rather primal, instinctual level. I've always had the notion that art cannot only be entertaining, nor can it only be remarkable – it needs to be both. It needs to both bring the mountain to Mohammed and get Mohammed to come join the mountain. If that makes any sense.

Nia: I loved the poem in which you played with the non-sensical/sensical words of an a legendary Icelandic blacksmith. This poem reminded me that both in Iceland and Wales poetry is a very important part of culture, identity and even everyday life. This enviable centrality of poetry can for poets be both an encouraging support, and key to continuity, but also potentially a conservative restriction.  What is your relationship with tradition? Is there something telling here in how you inverted the story and language of the blacksmith?

(Is this the poem I saw? On Lyrikline?)

Eiríkur: Yep, that's the one. Æri-Tobbi is the name – Mad Tobbi.

My relationship to tradition is a troubled one. Choosing Æri-Tobbi to work with isn't exactly a typical choice for someone meaning to give homage to his past – he's mostly seen as some sort of joke (and in the five volume tome, The history of Icelandic literature, he's not mentioned other than in passing while discussing someone else). It's not that I am not interested in the poetry or that it doesn't give me anything, this "having a tradition" thing – but I feel I want to subvert it, if only to escape the "nation-building" chauvinist parts of it, the parts used for political speeches and cocktail parties, where the president or the prime minister will use all of it, from Snorri Sturluson to Björk and beyond, to justify their own political ends, be they to encourage the now bankrupt bankers of old in the outwards excursions, or to garner support for increased isolationism, or the idea that Icelanders are somehow radically different.

There is also a problem where this continuity of tradition blocks out other important traditions or influences from abroad. Iceland, for instance, doesn't have an avant-garde history. There are a few pockets here and there where something happened – but no continuity. Which is also why I like Æri-Tobbi – it's a way to create an imagined avant-garde continuity (as all traditions, like all nations, are beautiful figments of our imagination).

Nia: Can you tell me what it was like being the poet in residence at the Library of Water?

Eiríkur: It was an honour and a pleasure. I don't know what more to say about it. It was a very hectic three months – I had a novel that just came out so I was constantly commuting to Reykjavík for readings, and the library was a quiet haven in between. I did organize two events there, a launch party for my novel, and a reading with my friend Angela Rawlings, which was wonderful.