Ondřej Buddeus (1984) is a Czech translator, poet and a sporadic essayist. He translates from German and Norwegian (J. Winkler, J. E. Vold, A. Mortensen et al.) and is editor-in-chief of the contemporary Czech poetry magazine Psí vino and is writing his doctoral thesis in Scandinavian studies. His work has been translated into German, Italian, Polish and English. In 2011, he published his début text collection 55 007 characters with spaces and a picture book for adults, Orangutan in captivity tends towards obesity. He was nominated for the Magnesia Litera Prize, Bank Austria Literaris and Dresdner Lyrikpreis. In 2013, he was awarded the Jiří Orten Prize for his collection Swiftly. 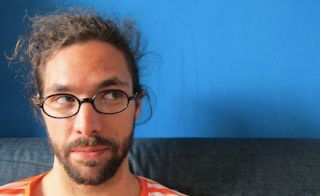 
Nia: I've been reading the poem Chatroom: The History of the Coca Cola Trademark in Central and Eastern Europe from 1990 - 2011. Like you I was born in 1984. So, though our educations began at different sides of Europe and we didn’t have to endure field trips to the same places, I share the same feeling of distant familiarity with the later events you describe in the Chatroom: the Gulf and Yugoslavia wars, Operation Enduring Freedom etc. In a chatroom you address in this poem I could say we share an awareness of world events, we are similar, ‘I am normal, and you?’ you seem to say. There's distant feeling of world 'experience'. You endure ‘field trips to Prachovské / skály and the Rwanda genocide’. The poem seems to explore the banal/shallow knowledge of online ‘friendship’. We both went to dance classes as the world trade towers came down and started work when as the war in Iraq began. This we share. I’d like to drive more too but I am scared of parking. So we must be ‘friends’. What do you think of this kind of ‘friendship’ we have? Do you find the kind of expressions and relationships one makes on the internet material for making poetry?

Ondřej: The one who is telling this poem, is actually not me. I always thought that here is speaking someone younger that me (let’s say 5 years) – so the situation is a little more complicated, because I’m reading that person's experience with the same eyebrow-lifting as you are – and perhaps with the same feelings. Is it his/her indifference (how can she/he equate a field trip to some local landmark with a genocide?) that is provoking me? Or it is not insensibility at all? (He/she knows well about what’s happening around her/him and has a very limited chance to do something). So is she/he a caring person or asocial idiot? Is she/he a guilty victim of infotainment and egoism or quite the reverse? I don’t know.

And based on this ambiguity it starts to be fascinating for me somehow – that person is speaking my language (and yours as I see, as well). Then I start to ask me if she/he isn’t too similar to me (since the “common/shared language” is an important cultural phenomenon and one of the pieces composing the identity) – and if yes – am I a person with the caring awareness or an idiot? Again, I don’t know. Do I really have to be friends with this person (yes, it is fictional, but nevertheless…)? The chatroom communication is extremely limited to the textual level (no voice, intonation, body language, gestures – so it is like all the social media an interface of role-playing-game), it brings a very special kind of friendship – a friendship-playing game. And this is something that you, me as well as that guy or girl do share and do intuitively know very well. Therefore I can hardly imagine that this identity– and relations– gaming/gambling will not be a part of what (and how!) we are writing. Or at least some of us.

Nia: can you tell me more about your ‘picture book for adults’?

Ondřej: It is a book with a very long title, namely 'Orangutan in Captivity Tends toward Obesity'. I wrote a series of three-lines poems (not really haikus) often using small paradoxes, minimalistic puns etc. There is one in English as well. It’s a kind of small subversion of the “artworld” where when you’re not speaking one special language, you are more or less invisible. It’s called “you knows”:

if be there no
English there
artist nobody!

I showed the texts to a friend, illustrator and artist Alžběta Skálová. Together with graphic designer Martina Kupsová we started to elaborate on a book which in its visuals uses the very same simper-subversivity as the texts do. And then, after all the work, we found out, that the pics and three-liners on the page compose something complex, you actually can’t separate them from each other when reading it. We knew from the beginning that it is going to be a book for “homo ludens” and because it is using the strategies of children literature, but the motives are from the adult world, we’ve created this category 'picture book for adults'. It’s nice and almost unmerchantable, because booksellers know only picture books for children or books for adults and if there is something in between, it’s rather confusing.

Ondřej Buddeus will be performing tonight at the final event of the festival - 'All ears' at Bangor University. You can read his poem in Welsh and English translation on the festival website.